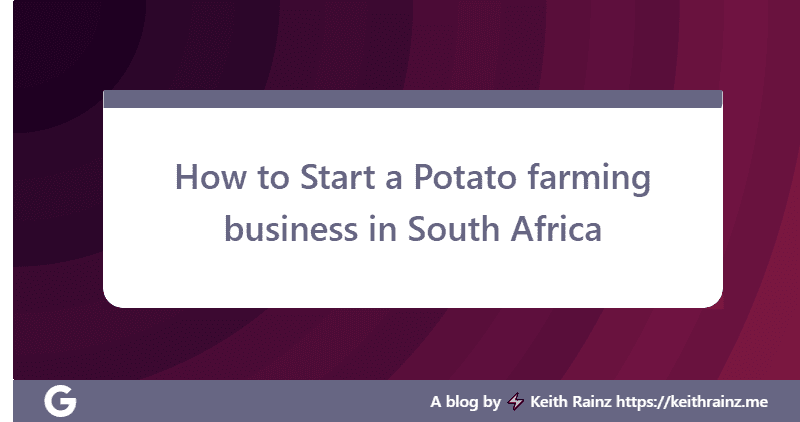 What is the demand for potatoes in South Africa?

The demand for potatoes in South Africa is high and in many countries around the world, as they are a significant staple food. Not only are they used as vegetables for home cooking, but they can be processed into starch for different purposes, such as being processed into food items and ingredients. The largest manufacturer of potatoes is China, followed by India and Russia. Annually, China produces about 96.13 million tons of potatoes, accounting for about 25 per cent of global demand.

Potatoes will still be in demand wherever you live, often used as vegetables or French fries.

How to set up a Potato farm in South Africa

When farming potatoes in South Africa, the most important things are fertile soil and quality Potatoesseeds. It is very possible to start potato farming on a small land, but you would need a bigger land to see satisfactory income.

Along with some fertilizers, potato seeds would account for about 50 per cent of overall spending. Running a profitable potato farm includes potato growing, planting and harvesting machinery. The machinery needed will largely depend on the size of the farm’s output.

Others read also:  How to download paid Udemy courses for free

What is the right location for Potato farming?

In regions that receive rainfall from 850mm to 1400mm per annum, this crop does well. The soil needs to be fertile and rich in organic matter with a PH of range of 5 – 6.5. Soil analysis is advisable; this can be performed at different research institutes. To reduce the chances of frostbite, avoid land that lies next to a river.

Buying seed from other farmers is the biggest mistake most farmers make when beginning a potato farm. Instead, farmers can purchase approved seeds, seeds that have been tested and demonstrated to be of good quality.

Pests and illnesses are unavoidable when farming potatoes in South Africa. It is important to always look out for pests and diseases, as they can cause your farm a serious disaster and badly damage your hard work.

The entry barrier for potato farming is very high, unlike other types of farming. It is not really one of those projects where, as time goes by, you can start on a small scale and scale-up. This is because, as opposed to a large scale, manufacturing on a small scale is more costly.

Others read also:  Some Alternatives to M1 Finance For Beginners

A small-scale farmer may not see a great deal of benefits, but there will be high production costs. This is not, however, to suggest it’s a bad idea to start tiny. Starting small is feasible and reaching a certain amount of success, but it’s harder.

How long does it take to grow potatoes?

Growing potatoes typically takes 70 to 120 days. This depends mostly on the type of potato, as there are several types. Others are earlier than others, ready for harvest. For up to 160 days, some potatoes will remain on the ground, providing a much heavier yield of large potatoes.

How to sell potatoes in South Africa

An easy way of exporting potatoes is to sell them to retail shops in bulk. It could be a lot of effort to try to sell the potatoes directly to the customers and farmers are only exhausted after harvest and want to make money, so selling in bulk is much more feasible.

This implies that a farmer has to enter an agreement with retail stores and strive to be one of their suppliers. If you are making high-quality potatoes, this should not be difficult. A potato farming company is sometimes not as popular as other forms of crop farming.

A company or enterprise in potato farming in South Africa is not a straightforward one, there are a lot of obstacles to entry. This does not mean you can’t be good, because there is a market for them, someone has to farm potatoes at the end of the day. It’s simple to do potato farming for yourself in your backyard, but you have to remember a lot of things while going commercially. If you happen to be good, you may find that it could be the most rewarding endeavour for you. In the comment section below, leave your thoughts and questions.

The wonderful thing for all South African sports bettors is

Others read also:  Should You Invest in Canadian Dividend Stocks?

With the surge of tourists to South Africa, who are mainly

There are many cases where psychologists make good money in

South Africa is well known for its magnificent mountains, b